A WOMAN who had comedian Stephen Fry’s face tattooed on her right hip has been left gobsmacked after the TV star sent her a hilarious Twitter reply.

The British actor and writer said he was “greatly honoured” after Rebecca Vincent from London had the 61-year-old tattooed on her body more than five years ago.

In the Tweet that sparked it all, Ms Vincent said: “Can someone let Stephen Fry know that I have had him tattooed on me for about five years. Thank you.”

The social media snap gained that much attention that the QI star spotted it and sent this hilarious response to Rebecca and his 12.7 million followers.

He said: “Oh my, Rebecca. And right by your clam … heaven bless us all. I am greatly honoured.

‘Your clam’ of course referencing one of Rebecca’s other tattoos on her hip and not what some of his fans imagined he was talking about. 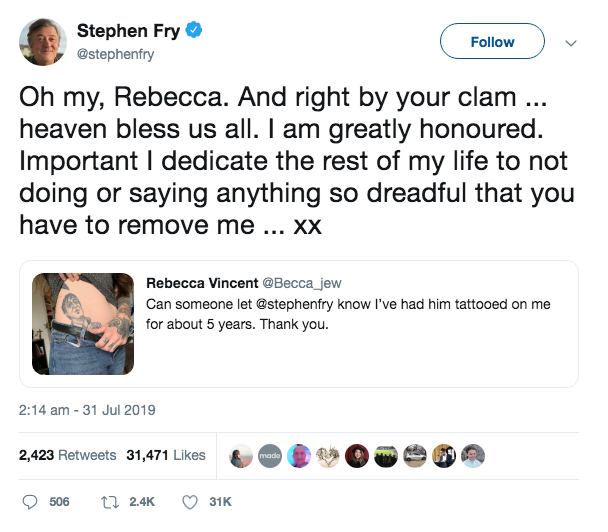 One person said: “I did not expect a reference to a woman’s clam from Stephen Fry in the morning. But I’m enjoying it.”

Another added: “I thought it was pretty eyebrow-raising until I saw the actual clam tattoo.”

For Rebecca, this isn’t the end. She says she already has plans to have TV veteran David Attenborough tattooed on her left hip.

Meet the London lad, 17, who was responsible for alternative version of EO’s hit single German ‘In a Corsa’ – how this boy from Croydon got into making music

You can watch this year’s Grammy Awards – featuring performances from Jay Z, Justin Bieber, Kendrick Lemar, Bruno Mars and many more – from your home in the UK