He left a strong impact on the audience who chanted his name throughout the show as well as millions of TV viewers at home.

Performing many of his greatest hits along with tracks from his most recent album Mr Morale & the Big Steppers, Kendrick kept the audience and viewers wowed.

BBC presenter Clara Amfo, who attended the show, found it hard to get her words together after the performance.

“I’m still a bit speechless to be honest,” she told her fellow BBC presenters as they discussed his set moments after.

Kendrick dedicated his song ‘Loyalty’ to the beatmaker after she shouted at him from the front row at Worthy Farm.

“That’s your song right there it’s dedicated to you,” he said.

Speaking exclusively to The Entertainment Gazette, Sazrah said: “I have always been a massive fan of Kendrick.

“He inspires me deeply as a musician. I love everything about his music, lyrics, his message and his visuals.

“He truly is a genius in my eyes. I was delighted to make it to the front row of his set at Glasto.

“I have never been so close to him at any of his concerts.

“Being so close was a big enough bonus for me, but to have him look me in the eye and dedicate his own song to me, I honestly thought it was a dream.

“Just before Loyalty started, there was a short silence and he was at my side of the stage.

“So I took the opportunity to shout ‘I love you Kendrick’ just as the track kicked in.

“He then looked right at me and said ‘That’s your song right there it’s dedicated to you’.

“I don’t even remember my reaction I was so stunned. I thought it had to be my imagination, even though other audience members happily patted me on the back after it happened!

“I didn’t believe it was real until I saw it back on TV the next day.”

Lamar wore a diamond encrusted crown of thorns said to be worth $3million made by Tiffany & Co.

The same crown consisting of 50 thorns, 8,000 cobblestone micro pavé diamonds and more than 137 carats is also on the cover art of the Mr.Morale album along with the promo photos.

There is meaning and message to his headwear choice.

“I wear this [crown] as a representation so you’ll never forget one of the greatest prophets to ever walk the Earth,” Kendrick explained to the Glasto crowd.

“We gonna continue to try our best to walk in his image (sic).”

After expressing this message Kendrick performed his final song ‘Savior’ for which he bled from the thorns, down his face and onto his white Louis Vuitton shirt.

He then passionately chanted “They judge you, they judge Christ. Godspeed for women’s rights” several times before dropping his mic and walking off stage drenched in blood.

A powerful ending to an unforgettable performance. 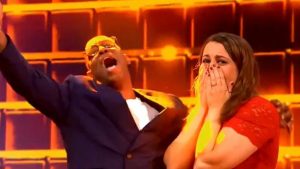