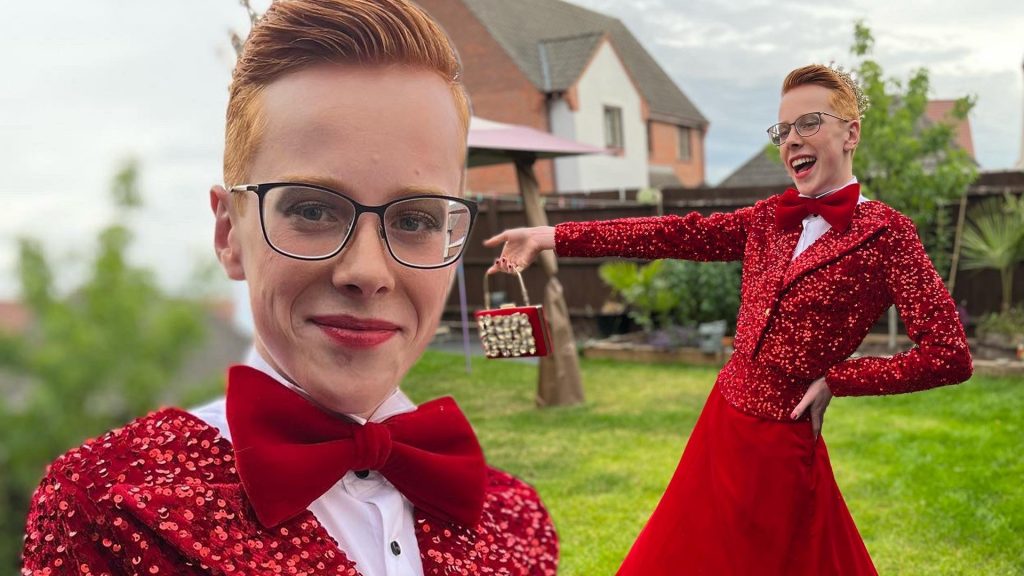 A FABULOUS 16-year-old boy who wore a bright red sparkly dress to his school prom was simply “living his best life”.

Since the age of 12, Korben Green has always wanted to attend his end-of-year prom in a gown, now the teen has done it.

He stepped out in a sequined tuxedo and ballgown skirt in front of pupils and staff at Archbishop Sancroft High School in Harleston, Norfolk.

“It sends a message – you can be who you want to be,” says Korben who goes under the name of ‘Miss Frou Frou’ as a “young drag queen”.

His mum, Nina, took to Twitter to share photos of her son looking absolutely fabulous on his big day, sparking reaction from celebrities.

Mrs Green said she wanted to show her son “living his best life” – and had no idea her positive message would “go crazy” in the way it had.

“As soon as he got out of the car, everyone just cheered and I was crying, some of the teachers were crying, because he was being who he wanted to be,” she told the BBC.

“Everyone has been very supportive, and his year group has been incredible.

“If you let your child be who they are then you’ll get nothing but the best out of them.

“There are people in the world who still don’t understand, but the feeling of acceptance, you can’t beat that feeling.

The next day, they were heading to Pride in London when Mrs Green’s phone went “crazy”.

Korben said it was “very surreal” Visage had shared the pictures of him.

“To me she is such an icon, a wonderful celebrity and I really admire her,” he told the BBC.

“When I showed Korben the retweet he was absolutely blown away – he was so made up,” said Mrs Green.

“We also had retweets from H from Steps, and Dr Ranj, it was amazing.

“Then at Pride, someone in the march came up to him said ‘are you the boy in the red dress? I think you’re amazing’.”